Almost by definition, cannibal films tend to defy any consistent tone. The prospect of eating another human body is so horrific, and yet so ridiculous, that films about cannibalism tend to veer vertiginously from one register to another, or else craft campily ingenious combinations of horror and comedy to try and envisage this ultimate taboo. The mere idea of cannibalism also denaturalises so much else that is taken for granted in most films – the relation between people and animals, the way that people interact, the way that the camera shoots bodies – that cannibalism often presents more as a denaturing effect than as a stable theme when it occurs in cinema, turning everyone and everything awry in its wake. Even if Ravenous didn’t have such a complicated and troubled production history, then, it would probably have still resembled the comedy-horror western that was released in 1999 – if not in terms of direction and narrative, then at least in terms of its indiscernible tonality. 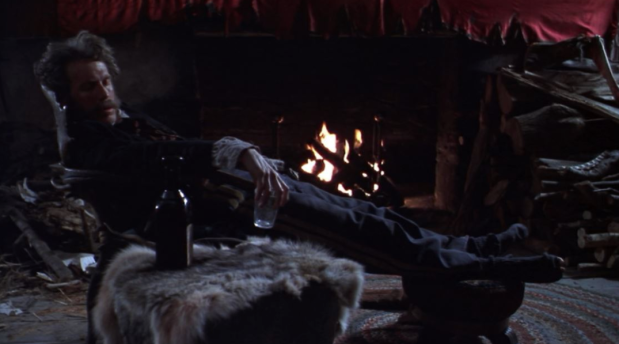 In its current form, the film takes place in the nineteenth century, on the eve of the Californian Gold Rush, and the waves of westward migration that followed. After being disciplined for cowardice in the Mexican-American War, Lieutenant John Boyd, played by Guy Pearce, is sent to Fort Spencer, a remote outpost high in the Sierra Nevadas. Only a few people live at Fort Spencer, which is commanded by Colonel Hart, played by Jeffrey Jones, and life is slow and tedious, especially during the winter months. However, Boyd has only been there a short time when a soldier who calls himself Colqhoun, played by Robert Carlyle, turns up naked on the doorstep. Colqhoun tells a grisly tale of a group of soldiers who were forced to spend the winter sheltering in a cave, where they eventually resorted to cannibalism. The worst cannibal of all, Colqhoun remembers with a shiver, was the demonic Captain Ives, who was left alone with his wife when Colqhoun finally managed to escape. Since this cave seems to fall within the parameters of Fort Spencer’s jurisdiction, Hart, Boyd and Colqhoun lead a small group to ambush the cave, where they hope to rescue Ives’ wife.

This trip to the cave takes up the first act of the film, and is probably the most suspenseful and tonally consistent part of Ravenous, taking us through a series of spectacular landscapes that grow more brooding as the cave approaches. This suspense peaks in an Alien-like sequence when Boyd descends deep into the cave, and discovers a collection of skeletons, only to realise, belatedly, that Colqhoun has led his men into a trap. Upon returning outside, he discovers that Colqhoun has killed the remaining men in the search party, before retreating into the woods. A cat-and-mouse game ensues, in which Coloqhoun seems possessed of super powers, forcing Boyd to jump off a cliff, and land in a dense thicket, where he lies for weeks before recuperating. Director Antonia Bird marks this period by doubling down on the flashbacks of Boyd’s time in the Mexican-American War, which make it clear that he, too, has experienced cannibalistic cravings. By the time Boyd returns to Fort Spencer, there has been an external investigation. His story of the cave is not believed, he is held responsible for the deaths of his fellow soldiers and, worse still, Colqhoun takes over the camp under the name of Ives, the very soldier he asked the first party to try and contain.

Since Ives is apparently known to the American military command, there’s nothing that Boyd can do but watch and wait for Ives to return to his cannibal ways, while also trying to resist his own cannibal desires. During this second part of the film, Bird presents cannibalism as an intensified male gaze, and even a sexual orientation, that locks Boyd and Ives into one intensive staredown after another. Beyond a certain point, cannibalism is equated with desire, since, as Ives explains to Boyd, there is no desire quite like cannibal desire. Once a man tastes flesh for the first time, his desire becomes more insatiable, and grows with each new body. Eating a man for the first time, or even anticipating eating a man for the first time, produces a new kind of hunger, and a new kind of romantic communion with men. These odd moments of romantic connection between Ives and Boyd offset both the comic and horrific parts of the film, and tend to coincide with the periods in the score when Damon Albarn’s soundscapes make way for Michael Nyman’s more lyrical interludes.

In the process, Bird largely dissociates cannibalism from overt spectacles of gore and viscera. Instead, cannibalism is equated here with the tactile proximity and preemption of other male bodies. Cannibal desire tends to be focused on the fingers, usually as they are caressing an object or surface, as the most edible morsel in the human body, while Boyd tends to be more closeted in the way he uses and observes fingers than Ives, who is presented as the “out” cannibal. Converting to cannibalism thereby becomes a kind of coming out narrative –  a form of embodied mindfulness, and a heightened awareness of other bodies, that is ultimately presented as a balm to mental health, in one of the more playful and provocative ways that Bird handles this most taboo of topics. In her vision, fear of cannibalism is fear of male homoeroticism, meaning that cannibalism is first and foremost a cruisey perusal of all the male bodies in one’s immediate vicinity, emphasised here by the very small number of men around – a cannibal optic that the camera also adopts as it slinks around the surface of Carlyle and Pearce’s bodies with insatiable appetite.

In other words, Ravenous presents fear of homoeroticism as a camp effect – one of several features that often resemble the Universal horror films of the 1930s and 1940s. At times, this could almost be an ingenious riff on Dracula, and the homoerotic fears of Dracula, since this vision of cannabalism is far more concerned with blood than with flesh. Gradually, we learn that Boyd first developed cannibal desires after he was buried under a pile of bodies in the Mexican-American War, forcing him to drink blood that was dripping down in order to survive. Similarly, when Colqhoun returns as Ives, he confirms that he still a cannibal by licking the blood on an open wound, before trying to tempt Boyd into tasting his blood as well. Cannibalism here consists in drinking bodies more than eating bodies, which means that Ravenous is quite unique amongst cannibal films in that it is not especially interested in the spectacle of flesh. Or, rather, it is not interested in the spectacle of dead flesh, since all the visceral intensity of human flesh, normally such a big part of cannibal cinema, is deflected into Boyd and Ives’ heightened awareness of each other’s bodies. Compared to that, the actual human flesh they do eat is almost an anticlimax – we only get brief glimpses of it, and, when we do, it just looks like beef, pork or any other regular red meat concoction.

Without the spectacle of dead human flesh, this late riff on the Universal horror cycle needs a monster – and screenwriter Ted Griffin finds it in the Wendigo. In Algonquin mythology, the Wendigo is a creature that behaves just like Ives and Boyd, feasting on human flesh, and growing more insatiable for human flesh with each new body that it consumes. The Wendigo also grows stronger with each new body, explaining Ives’ superhuman strength. In fact, cannibalism is so restorative here that Ives is able to bring Hart back from the dead in the third act of the film, and return him to pristine health with a steady diet of human flesh.

While the Wendigo has inspired many American horror films, the originality of Ravenous is that it reimagines the Wendigo as a prophecy of colonialism, foreshadowing the cannibal spirit of the frontier. Rather than exist as a discrete monster, the Wendigo marks Colqhoun’s transformation into Ives – the very cannibal he claimed to be escaping – and then marks the cusp of his oscillation between Colqhoun and Ives as the rest of the film unfolds. This turns Carlyle’s character into both an emanation of the landscape (Colqhoun) and a disciplinarian of the landscape (Ives) – a dynamic dyad that embodies the colonial logic by which an invading power conceives of a landscape as a collection of unruly impulses that need to be suppressed, along with the appropriation of indigenous mythologies that is often used to assist with this process. Not only does the Wendigo anticipate colonists, but the way that colonists will appropriate this very myth to reiterate their ideological agendas.

This makes Ravenous a particularly visceral vision of the American west, fusing frontier capitalism and frontier cannibalism in the name of Ives’ vision of “manifest destiny…westward expansion.” Even Hart, the most avuncular colonial figure, has an inner cannibal, as the film seems to anticipate Jeffrey Jones’ shift from lovable character actor to convicted sexual offender in the wake of his assault charges a decade later. In the most emphatic way, this cannibal trio become the frontier, as Ives unfolds their next great plan: to harvest the next wave of immigrants crossing the mountains in search of gold, land and the American Dream. Extolling the frontier spirit of innovation as he prepares for these new victims, many of whom will becomes cannibals in turn, Ives settles into the role of a founding father, reinventing Ben Franklin’s common-sense aphorisms as cannibal maxims: “Eat to live, don’t live to eat.” Whereas most westerns are quite paranoid about the homosocial and cannibal overtones of the old west, Ravenous provocatively suggests that the frontier was nothing but the calibration of homosocial and cannibal impulses – a site of perversion, pleasure and unfettered accumulation of homosocial and cannibalistic capital.

Rather than detail this whole process, however, Bird and Griffin end with a brilliant tableau that keeps us poised at this homosocial and cannibal cusp. In trying to resist Ives’ scheme (even as he is tempted by it), Boyd pushes him into a bear trap, lying on top of him, and allowing himself to perish, to ensure that Ives is fatally penetrated by the bottom part of the trap. Locked in a copulative embrace, Ives is prepared to eat Boyd for pleasure, rather than just for survival, but Boyd won’t even eat Ives for survival, since this might mean conceding some inadvertent pleasure. That tension, as the film puts it, is what constitutes the western, so it’s a bit disappointing when Boyd is freed during the final seconds of the film, and made me wonder whether this last embrace was originally intended to be the real ending. In any case, it’s the ending that endures – a fitting final image for a film that plays less like a western than as the conditions of possibility that allow the western to exist in the first place.

Copyright © 2020 Create a free website or blog at WordPress.com.