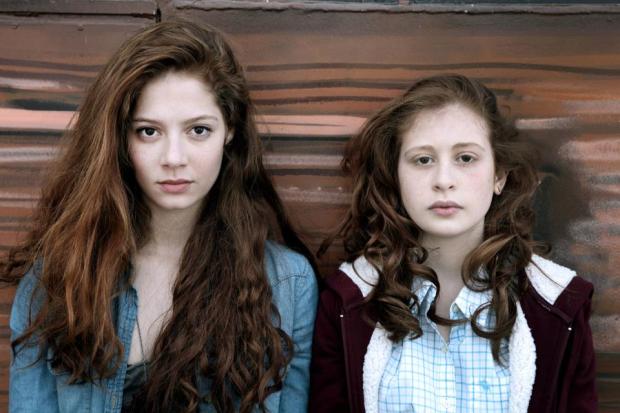 Over the last couple of years, horror has become more and more prominent as a television genre. From the increasing critical acclaim of anthologies like American Horror Story to the renewal of franchises like Scream and The Omen on the small screen, it has suddenly felt as if horror is everywhere. If the golden age of “quality” television is in decline, then it is through the horror genre that that decline has often been most powerfully felt – on the one hand, through the rise of increasingly schlocky, pulpy and exploitative exercises in “pre-quality” horror; on the other hand, through efforts to envisage horror itself as a “quality” genre. Similarly, horror has also encapsulated the movement away from the sweeping, auteurist, multi-season format of “quality” television, with horror series increasingly poised between an anthology and serial sensibility, and some particularly innovative offerings – such as Hannibal – seeming to offer both options within a single experience.

Despite this wealth of options, I’ve been yet to find a horror series that really spoke to me, or a horror series that really managed to sustain suspense over the course of an entire season. Granted, I probably haven’t give Hannibal enough of a chance, but I had still more or less resigned myself to this situation until I watched the first season of The Returned a couple of weeks ago. Although this series was extremely critically acclaimed when it came out in 2012, it more or less passed me by – my boyfriend and I watched an episode or two at the time but never really came back to it. In retrospect, that’s probably because The Returned works so brilliantly and beautifully as a single eight-hour experience, which is not to deny the deftness with which each episode is structured in relation to the whole, but simply to acknowledge an atmosphere and tone that is remarkably sustained and immersive when watched in a single sitting, or over a short space of time. It felt right, then, when we discovered that the second season was only released at the end of last year – and has only just been released on Australian television – since the first season is so pregnant and powerful that it really needs to be remembered and digested on its own terms for some time before launching into the follow-up. 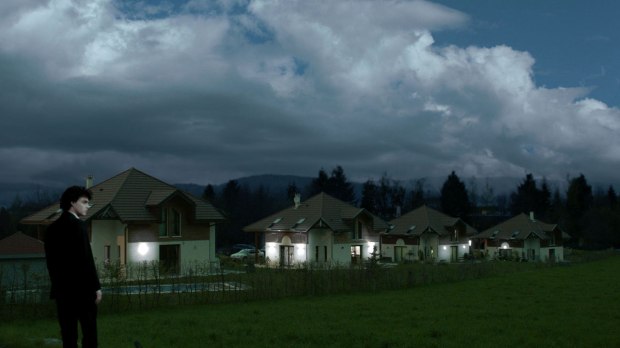 By this stage, the premise of the series is probably fairly well-known: the inhabitants of a remote French mountain town start to gradually realise something is afoot when various members of the community, both past and present, start to return from the dead. What makes the series so powerful, however, is that this return happens so gradually and locally that it’s only by the end of the season that the town has any collective sense of what is going on – and even then it’s confined to a fairly small proportion of the town. Each episode is dedicated to a particular person who has returned, and the timeframes vary greatly, from a little boy who has returned from so far in the past that nobody recognises him, to the nurse who takes him in, who gradually starts to suspect that she returned after being stabbed in the stomach by a local serial killer (another returnee), spending such a brief amount of time dead that nobody ever recognised her as a returnee in the first place. As that might suggest, the series strives to avoid any sense of the return as a single event, just as it refrains from envisaging the returnees en masse.

Instead, the series is poised on a fine space between life and death that becomes more and more precarious and perplexing as the narrative unfolds. To take just one example: the serial killer mentioned above returns from the dead only to find that his victims have returned from the dead but that he is still unsatisfied, embarking upon another bout of serial killing whose victims in turn start to return. In another series, that might come off as picaresque, or gratuitous, but the result here is to fuse life and death into a single state, or to paint a picture of life in which death has always just happened and death is always just about to happen. In that sense, the series sometimes plays like a darker, more supernatural version of Six Feet Under, except that where Six Feet Under opens each episode with a character who is about to die, here each episode opens with a character who has already died, and follows them as they gradually come to realise that fact. As might be expected, there is no single way in which this realisation occurs, with several of the characters only cottoning on after living people, or other returnees, have informed them of their status. The result is a profoundly melancholic ambience that nevertheless falls short of descending into grief porn thanks to the perfectly pitched uncanniness with which the returnees gradually come into visibility both to themselves and within the local community.

That atmosphere is enhanced by the beautiful backdrops, which veer between natural and technological sublimity – the village is built around a giant hydroelectric dam – and are accentuated by Mogwai’s instrumental score, which percolates throughout virtually every scene. While it’s become more or less standard to compare any television series with atmospheric ambitions to Twin Peaks, this is one of the few shows I’ve seen that’s comparable in its otherworldliness. As with Twin Peaks, you feel as if you’re caught in a shifting space between the natural and the supernatural, between melancholy and revelation, especially towards the close of each episode, which usually revolves around some eerily disjunctive image or tableau. At every opportunity, the writers and directors amp up the uncanniness, often in ways and through scenarios that you only fully register in retrospect, and always in such a manner as to subtly shift the collective apprehension of the returnees as a group, even if that apprehension only feels as if it settles into any kind of consensus or unity with the final scene of the series, and feels precarious even there. In an era in which actual physical space ramifies less and less in television, there is an extraordinary spatial ingenuity to the way in which the series uses actual infrastructure – an underpass, a spiral staircase, the hydroelectric dam, the back room of a bar – to continually position the returnees at the fringes of both individual and collective apprehension. Although it takes place in a recognisably physical and embodied world, then, this is very much a post-perceptual aesthetic, with every beautifully crafted moment seeming to evoke something just beyond or beneath the threshold of its beauty. 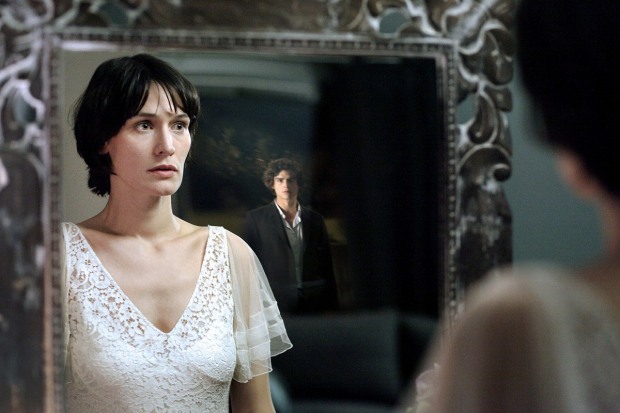 Among other things, that perceptual threshold allows the series to introduce a whole variety of supernatural asides and possibilities only to leave them to float in mid-air. Rather than the supernatural having to underpin the natural in any direct way, the two converge in much the same way as Twin Peaks, creating an environment in which the strangest activity can take place without needing to explain something or needing to be explained in turn. To some extent, that convergence creates a sense of apocalyptic expectation, especially in tandem with certain signs and harbingers that increasingly circle the town, but the possibility of any one single destructive spectacle – or at least a spectacle that is available to everyone in the same way all at once – is offset by the subliminal and gradual ways in which the returnees blend back into the local community before they can properly designated and segregated as something “other.” That subsumption of something alien back into the everyday before it has a chance to fully articulate its difference is the very definition of the uncanny, and, in the transition from episode to episode, scene to scene and shot to shot – the editing is masterly – The Returned beautifully identifies it with the thwarted momentum of late serial television itself.

That sense of a thwarted lineage perhaps explains why this is also about the best performance I’ve seen from children in any series during the recent “Golden Age” of television. As might be expected, the returnees often tend to articulate themselves in and around children and the series draws out the uncanniness of children, and the paradoxical and perverted – if generally sublimated – ways within which they are positioned in television more generally. For a while there, creepy children were so much a part and parcel of cinematic horror that it was hard to see how they could ever be horrifying again, but The Returned succeeds in reinvesting them with something of that terrifying potential, largely because their separateness from the adult world feels increasingly analogous to – if not always identified with – the separateness of the returnees, with the result that even the most innocent and protective moments are overlaid with an eerie prescience of mortality as well as a kind of collective melancholy and mourning that is set in place from the extraordinary opening scene, a school bus accident that takes many of its cues from Atom Egoyan’s The Sweet Hereafter. In fact, Egoyan’s disjointed and displaced family setups are a good touchstone here, just as there’s an increasing sense that the action is unfolding in a French colony, enclave or periphery of some kind, somewhere oblique to the daily life of the nation.

For all those reasons, I’ve deliberately held off watching the second season until the first has a bit more time to sink in. For those who watched it the first time around, the two year gap between the first and second seasons meant that that was a necessity, but I also think that there is something mysterious and resonant about these eight perfect episodes that makes that kind of time lapse necessary, not unlike the extended gap that has taken place between the first and second seasons of Jane Campion’s Top of the Lake. In fact, I wouldn’t be surprised if the first season was initially meant as a stand-alone miniseries, nor if the second season sets out to be something entirely different from the first, since it’s just that hesitation between serial and standalone imperatives that makes the action feel so mercurial as it moves towards its conclusion. From the couple of episodes I’ve seen from the second season – I watched a few and then decided to wait – it does indeed seem as if it’s going for a different kind of tone this time around, just as the second season of Twin Peaks had to partly reinvent the first in order not to detract from its originality. All of which is to say that there is something extraordinarily resonant about The Returned, something that stays with you and haunts you long after the series is over. Whereas different horror series aim to extend and distend suspense in different ways, here the solution is a suspended ambience of dread, uncertainty and the uncanny that is never fully consummated and resolved, but wraps the entire season into a single atmospheric and immersive experience, in what has to be the greatest contemporary horror series I’ve seen.